A poltergeist is a soul that was once incarnated in a human or an animal body, and that remains at a fixed location after death. These souls are usually (or perhaps always) traumatized. They mean no harm to the inhabitants of the house. To the contrary, they often don’t even know where they are, or what happens. Even when all kinds of objects are falling down or flying around, they are not aware of it. In the videos below, a soul without a body is moving through the kitchen space. Because of this movement, some objects start to move. I have no idea why this happens. The soul is not aware of it either. It doesn’t want to cause this commotion, it is dazed or caught up in its own inner world. I have represented the soul as a white ball in these pictures (a little oval), but in reality, it is grey. Not all the souls are grey, see text about souls.

The two videos below show the same scene with a bit of difference.
The video right below is an excerpt from a video from the youtube channel Slapped Ham. There is comment added to the video.

The video below is from the person who made the original footage. At the beginning the video is different from the video above in that you see a man set up the camera and then leave. This part is not included in the first video.

The pictures below are excerpts from this last video.

The person who was in the kitchen, leaves and the soul is present in the kitchen in the top right hand corner. Everything is still quiet now. 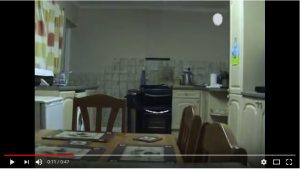 Description of the soul

I can sense the soul’s personality. The last life of this soul was in the years 1700 or 1800. In that life, it was incarnated in the body of a man. He had a rough childhood. He had a rough upbringing with rough, uncivilized people. He had  low moral values and he was a thief in that life. He thought it was normal to steal from another person in order to survive. That’s how things were done in life, you just had to make sure that you didn’t get caught. His philosophy was: it’s every man for himself, you take what you need, there’s nothing wrong about that. As long as you aren’t caught, it’s ok.
He was hanged in the years 1700 or 1800. Before he was hanged, he felt an indescribable fear. This may possibly be the incident that keeps him prisoner as a soul, as a result of which it roams around in a house without being aware of it. Perhaps there are other elements in the soul’s subconscious mind that cause it to be trapped. In its subconscious mind there is an enormous fear of life, of having to go through the same thing again (being hanged).
The soul has no more recollections of this previous life or of the incident of being hanged. The moment it broke free from the body, all memories of the previous life were shut off and the soul entered a condition of daze which it has been in ever since.

The soul has very little awareness of things, it barely realizes it exists, or where it is. The only thing it does is move through the space, and it isn’t aware of objects falling down. It has a lot of anger inside, but it isn’t angry at this moment. It moves through the kitchen space, which has an effect on material things (I don’t know why that is).
The soul mostly stays inside the house where it is at this moment, it sometimes goes a little further, outside the house. The owner of the kitchen said that the poltergeist activity has been going on for a month. I think that before the soul was in a house somewhere in the neighbourhood, and that it possibly left because there was another soul around. The soul has very little awareness, but if there is another soul around, it can perceive this. Now and then there is another soul nearby, but it wants to avoid them, it will flee from them. It has an irrational fear of other souls. It doesn’t want to have any contact with other souls and only when that other soul has gone, will it return to its previous location (additional comment see *1 at the bottom of the page).

The different stages of the kitchen incident

The soul is on top of an object, which falls down (because of some influence emanating from it in some or other way, the soul doesn’t make any conscious effort to have the object fall down). 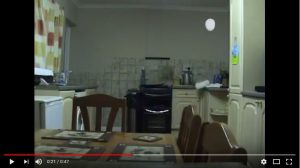 On the left side of the kitchen, an object on the cupboard falls down, the soul is to the right and on top of this object. 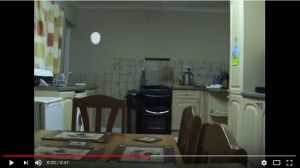 Another object falls down, the soul is to the left of and above the object falling from the black stove. 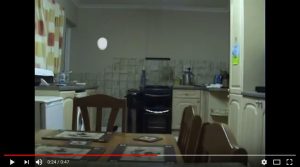 The soul has moved a little to the right. Objects below it keep falling from the stove. 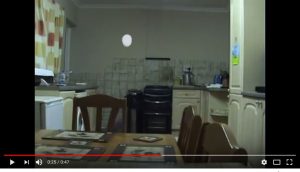 A chair falls down along with some objects near the wall across. The soul is in between the table and the wall. 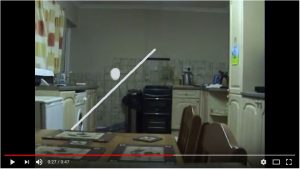 The soul is now on the right side of the kitchen, close by the coloured sheet that hangs on the kitchen cupboard. 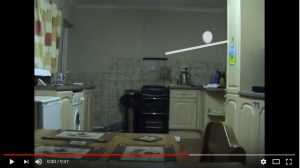 The soul is still in the same location and objects on the cupboard to the left and to the right of the soul are falling on the ground. 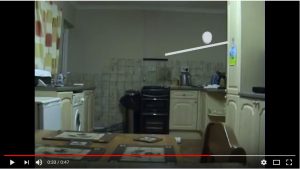 The soul is now close to the back wall. It is above an object falling down. It then moves a little to the right and the slide of the drawer below opens and some cutlery flies into the air and then falls on the ground. 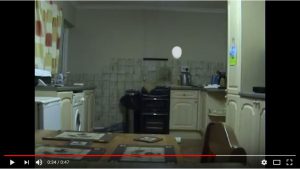 The soul is above and at some distance from a cupboard on the left side of the kitchen, some objects on it fall on the ground. 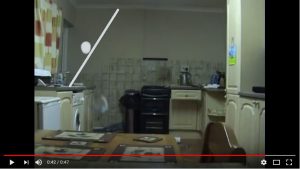 The soul is still in the same location. On the other side of the kitchen a cupboard opens and an object falls out of it. 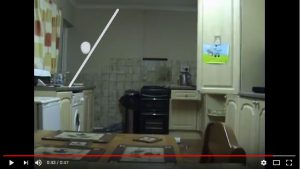 This soul can be removed from the house by a psychic healer who can do this kind of work, or perhaps by people who go to the scene in order to clear the house (I don’t have experience with this, so I don’t know this for sure).
The psychic healer needs to be able to perceive the soul, and has to be able to break down subconscious blockages/incidents. This can also be done from a distance, the healer doesn’t necessarily have to be in the house to do this. It may suffice to break down the hanging incident, or it may require more work. A healer has to try to find the incident in the soul’s subconscious mind, and to lay bare more and more elements of this incident, as a result of which this incident will be shattered and will no longer be present in the soul’s subconscious mind.  Then the soul will be able to move on. Regression therapy does the same thing. An incident is looked for, and every little piece of it is scanned, until the entire incident is uncovered and the incident is destroyed. A subconscious incident consists of a subtle matter, and when the elements of an incident are recalled, this matter will be shattered, and the incident will be removed from the subconscious mind. This is called ‘discharging’ an incident.
Sometimes it only takes five minutes to remove the poltergeist with this technique, but sometimes it may take half an hour, or several hours at worst.
For more information on the subconscious mind, please read my book.