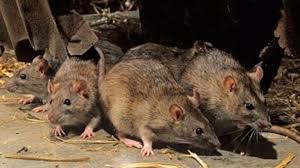 The rat in the far right of the picture

The rat heard a noise. He is on his guard against danger, he is ready to sprint away immediately if something might come up to him. He is cheerful at this moment, he is content. But he is tired, I think he is not in good health. He doesn’t always have sufficient food, his immune system is weakened, he is susceptible to diseases. During the days that he is ill, he lies on the ground exhausted. Nobody bothers about him, the other rats simply walk over him, then he’s on his own. Then he sometimes doesn’t have any food for a few days. Then he gets a little better again and he can start looking for food again. At this moment, he has regained his strength a little and he is doing a little better. He is cheerful at this moment, because he has just eaten and he can go on for some time now, and as a result he’s less worried about food than normally.

The rat has got a good memory and he can reason, he can make calculations, he can make estimations. He can calculate how much food he still needs in order to get by the following days. He can estimate the distance between himself and the food and he can calculate how much time it takes to get the food and return, and how great the danger is in doing so. The danger is that a different kind of animal would steal his food away.

He often worries about whether or not he will find enough food. Sometimes there isn’t enough food, sometimes there isn’t food for days on end. Then they can only drink water. Because there isn’t always food on hand, he is weakened physically.
He is a daredevil, he is not afraid to take risks to find food. When they are desperately looking for food, then he sometimes ventures to cross open fields, where he might fall prey to predators on the ground and birds of prey. But he has always been lucky so far, he has always been able to escape unhurt. And he sometimes has to cross a ditch, he has to swim through the cold water, but he would do anything to find food. He would be prepared to do anything for it. When he has found food, he doesn’t share it with others and others don’t share it with him. They all have to take care of themselves.

They live in a group because it’s safer that way, because they are better protected against predators that way. A predator will not be as inclined to attack a group of rats as he would be to attack a single rat. If a predator attacked a rat in the group, then the other rats would go on the offensive to chase the animal away. But a single rat is defenseless against a predator.

He is competitive towards the rat next to him. When they find food, they would both want to catch it, but he will do anything to prevent this from happening. He will make sure he gets there first, and if the other rat wants to steal the food, he will push the rat away, and when the other rat gets to the food first, he will attack the rat to take the food away from him. His feelings towards the other members of the group are the same.

The second rat from the right in the picture

I think that this is a female animal, because I sense that she has pups. She feels competitive towards the rat on her left. She has a negative feeling towards that rat and also a light feeling of hatred. The other rat is faster than she to find food and to appropriate it. That’s why she never gets the best pieces, she has to make do with the less attractive food.

She feels small and humiliated towards the other rat. She doesn’t stand a chance against the other rat. The other rat is dominant, appropriates everything, pushes the others away, will never share or help. If she is hungry herself and doesn’t find any food, and that rat next to her has a load of food in front of him, then that rat will push her away when she comes closer in order to eat some of it. She feels powerless and she feels that she’s on her own. If she is so lucky as to find a large amount of food herself, and another rat tries to pinch some of it, she’ll also push him away. She won’t share with anyone either, even if she has enough herself and the other one is hungry. She doesn’t like the other rats, she lives for herself. They live together as a group because that’s safer, but if she had the choice, she would prefer to live on her own. She doesn’t care about anyone, and not about her pups either. She will feed her pups, and teach them things, but that’s because that’s something she simply has to do. That’s her task, that’s what’s expected of her. She communicates with her pups by making noises, these noises are some kind of language. And she also teaches her pups things by showing them. She is not as intelligent as the rat next to her. She can’t think about something, she can’t reason. She can perceive, she can learn when something is demonstrated to her. She doesn’t have a good memory, she can’t remember things well, for example where they found food before. But she is intelligent enough to manage in life.

The third rat from the right in the picture

This rat is anxious and insecure. He doesn’t get much love and support from other rats. He has a good memory and he is quite intelligent. He is very alert, he sees everything, he notices everything. He is very fast. He won’t let another rat steal his food, he will fight for his pieces. He can hold his own ground with regard to protecting his own food, but for the rest he is anxious and insecure. He is afraid he won’t find any food. And he is insecure in his behaviour towards the other rats. He is a little afraid of the other rats. That is not because the other rats will hurt him, but because he is insecure by nature.

The rat in the far left of the picture

This rat is playful. He likes to tease other rats. He will sometimes brush past another rat, and pretend to steal their food. But he doesn’t mean it, he does it to tease. He is shrewd, fast, alert. He sees through other rats because he is intuitive by nature. He even has an extraordinary sense of intuition, he senses quite a lot about the other rats, and he can estimate the other rats’ behaviour in advance.

He doesn’t count for much in the group, but he doesn’t care. The other rats look down on him, he is at the bottom of the social ladder. He is often pushed away or ignored, but he couldn’t care less. His teasing is partially triggered by his being ignored, in order to draw the attention. When he has enough food, he is satisfied, he doesn’t wish for more in life. He lives in his own small world, he is caught up in fantasies about good food, and he doesn’t notice much about the outside world. The other rats are strangers to him, he doesn’t have any negative or positive feelings towards them, they are indifferent to him. He is obsessed by food, he thinks about food night and day, he would want to eat all the time. Since he’s so occupied with that, there is no place for other worries in his head.