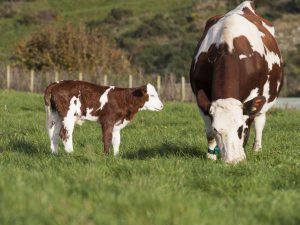 The cow is completely focused on grazing. When she grazes, she distinguishes the grass and the plants she wants to eat from the ones she doesn’t want to eat. The cow feels happy, she is pleased. This has to do with the tasty food she is eating. When she grazes, she is over the moon, then her world is perfect, then nothing can trouble her joy. When she grazes, she looks for the tastiest plants, and when she finds one that she likes very much, she’s happy. While she grazes, she already thinks about ruminating, which is a pleasant prospect. She likes grazing, but the moments of ruminating are even better, those moments are supreme happiness. Ruminating means many hours of doing nothing, of lying on the ground and relaxing, giving her thoughts free rein. Then she thinks about the other cows in the field, about their character and about the way they treat each other. There are three cows in the field that exude power and dominance. The cow perceives this personality trait as a field that is present around a certain cow and which contains a certain emotion. This could be called psychic perception (additional comment see *1 at the bottom of the page). The other cows automatically keep some distance from those dominant cows and don’t come close to them. The dominant cows are somewhat arrogant and hang around together and they have marked out a territory around them that the other cows better stay out of. The other cows sense the haughtiness of those three cows and automatically sense that they’d better stay out of that territory. Once again, they know this by means of psychic perception.

The cow doesn’t like those dominant cows, she prefers hanging out with the nice cows, who quietly lead their life and who don’t meddle with other cows, and who she can dominate herself. She socializes with cows who don’t really dare to stand up for themselves and who easily go along with the wishes of more dominant cows like herself, and to whom she can make her importance felt and to whom she can make clear that she has the right to graze in the spots with the best grass and the best plants. Dominance means, among other things, that a cow marks out a territory where she wants to graze, and where the other cows have to stay out of. This cow is not very loving, but some cows are.
She first goes to the nice cows and she makes contact in a friendly way. She does this by simply grazing a little around the other cows, meanwhile finding out the location of the best plants. Next, she wants to let the nice cows know that she wants to have a certain area for herself and that the nice cows have to stay out of it. She feels she’s important and she thinks she wants to graze at a certain place and that the others have to stay at a certain distance from it. Her thoughts and feelings create a radiation that is sensed by the other cows, who understand the message and who keep sufficient distance from her (additional comment see *2 at the bottom of the page).

Her calf is not very important to her. She’ll take care of it because she’s supposed to do this, but she doesn’t feel much love for it and she is not much interested in it. She is more occupied by herself than by her calf.
The calf is a little sad, it feels a little lonely, it feels a little rejected. It can drink from its mother, and she will sometimes stroke it with her head, but most of the time she has little interest in her calf.
She’s ok with the routine of going into the stable and being milked when she doesn’t have to feed a calf. Afterwards, she can once again go out into the field and then she’s happy again.
She’s very indifferent towards the people who herd the cows. She considers them more as some kind of machines that drive them to the stables and to the fields, rather than as thinking beings. Only the group of cows is important to her.

She’s not very intelligent, she can’t reason, she doesn’t understand things easily, she mainly only perceives things, without thinking about it. She can think about the other cows, and she can distinguish the different plants, so she has some intelligence.

The cow perceives the subconscious mind, which is present around an animal and which consists of a certain substance that contains feelings and ideas. For more information on my view on the subconscious mind around humans and animals, please read the book that I wrote on this subject. 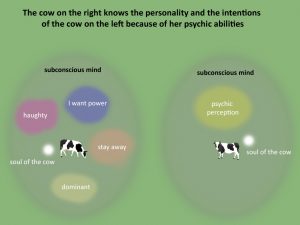 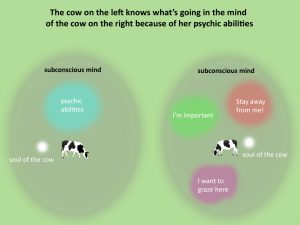