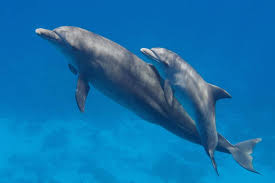 The dolphin is very happy at this moment. She feels very much love for her calf. She’s over the moon since she has a calf. Now she has a purpose in life. Before she had the calf, her life seemed hopeless. It was a life of swimming along with the group, and of not being important in the group, of counting for nothing in the group, of being almost invisible in the group, and hoping to get sufficient food.
When you’re at the bottom of the social ladder in a group, like she herself is, then there’s not always enough food available. The more important dolphins in the group get food first, and if there’s something left for the lower ranking dolphins, then she gets food and otherwise she doesn’t. In times of affluence, everyone gets food, but not in times of scarcity.
She’s physically not as strong as the other dolphins. She has a pressure in her chest, there is a problem in her chest, I think it has to do with her breathing. She doesn’t have enough energy to swim, and therefore she can’t catch as many fish as the other dolphins and as a result, she is automatically positioned at the bottom of the social ladder.

Since she can’t catch fish very well because of a problem in her chest, as a result of which she can’t swim very fast, and as a result of which she can’t swim fast enough towards her prey, she has to make do with younger, smaller fish. She can catch those (younger fish are apparently less good at evading predators). In times of affluence a higher ranking dolphin who can catch many fish sometimes throws her a fish. And that’s how she survives.
She doesn’t get much respect from other dolphins. They often push her away so that she remains outside the core of the group, as a result of which she has to swim along on the edge of the group. She is very sad about her fate, about her situation: counting for nothing, having to swim on the edge of the group and often feeling hungry. Then she pities herself and she feels excluded and she would like to swim to the middle of the group and indicate that she also has the right to have sufficient food. And then she would signal this by making angry sounds and with body language. But the other dolphins don’t feel sorry for her, they don’t sympathize with her situation and even if they would, then they would still push her back to the edge of the group.

But now she has found a new purpose, which is raising her calf with much motherly love and the right guidance. She also receives more food from the other dolphins, now that she has a calf. She wants to give the calf a good education about how life is, for example, the hierarchical system, the dangers in the water (predators, fluctuations in temperature, the distances they have to cover), about the kind of food, and she wants to learn the calf abilities (jumping, twisting).

She is a loving dolphin. She feels much sympathy for other dolphins. She is helpful, she wants others to prosper and to find sufficient food, she wants to help others to hunt when she has enough herself. She wants everyone to have enough food, unlike some other dolphins who are jealous of the food that others find and who want everything for themselves. She leads others to places where there is food. She hopes that others will then also help her to find food when she doesn’t have enough food. This is part of her motivation to lead others to food, but it’s also because she’s simply helpful and loving and because she wants others to have sufficient food. She leads others to food by making a certain sound to attract the attention of a dolphin and then she indicates a direction by making other sounds, or she will swim in a certain direction or she uses body language to show where the food is.

She likes the contact with other dolphins, she will swim around them and she wants to chat (by producing sounds, by way of body language or with swimming movements), but many other dolphins don’t want to have anything to do with her and they push her away. Also the ones that she has helped to find food or to learn things don’t always want to have much to do with her either, which makes her very sad. Even if the dolphins have chased her away, the next time they need her help, she will help them again, nevertheless. She always tries again, but time and time again she doesn’t succeed in building good relationships. (additional comment see *1 at the bottom of the page).

This dolphin is intelligent. She knows different strategies to catch food. She has an overview of the ocean (locally) in her mind. She can make a mental picture of the location where she finds herself.  She has a feeling for the space around her: distances, left, right, in front of, behind, above, under. She thinks and reasons in her head, she calculates distances, how many fish there are, how to best swim, what strategy to best apply in order to catch a prey without offending the other dolphins. For example, she doesn’t want to go after a prey that another dolphin has already set their sight on. She only has the right to eat the preys the other dolphins don’t want to eat. She feels unhappy about this situation, but there’s nothing she can do about it, she has to adapt. She knows the condition of the seabed. She knows different ways of swimming. She knows how to raise her calf and she has received this knowledge from her mother.

She educates her calf in the following way: she instructs by demonstration and by making noises that have a particular meaning.
– A sound for: pay attention, I’ll demonstrate it to you.
– She wants to learn him things about numbers (I can’t sense in detail what this is about, it makes me think of a mathematics class). There is a different sound for every number and a second sound to indicate whether this number is something positive or something negative.
– She wants to educate him about the three dimensional representation of their location in the sea, including all visual elements and the elements acquired by way of echolocation and the distances between the various elements. She wants to learn him how to best create a three dimensional image in his mind. The calf automatically makes a three dimensional image in his mind, from birth. Many dolphins always have an 3D picture of their surroundings in their mind. There are also dolphins that can’t make a 3D image in their mind. A calf has to learn to use the 3D image correctly. He has to learn how to use it when searching the seabed while keeping an eye on the space above him. He has to learn how the use the 3D shot in order to assess the mutual distances between the dolphins and the distance from the preys, this is a talent required for hunting preys. She learns him things about the various elements in the 3D shot. I can’t sense in detail how she learns him this, but I can sense that she does it with sounds and by showing it. Without education, a dolphin would not always know all the possibilities of the 3D shots in his mind.
– A sound for: this is how you swim, I’ll show you.
– A sound for: this is how you catch a fish, I’ll show you.
– A sound for: this is how you make that jump, I’ll show you.
– A sound for: this is how you avoid your enemies, I’ll show you.
– Sounds for learning the differences in temperatures in the water.
– Sounds for which food is good to eat and which food isn’t.
– Tips on which dolphins to associate with and which dolphins to stay away from, tips to stay away from haughty, dominant dolphins. She produces a warning sound around the dominant dolphins and a sound expressing a positive feeling around the dolphins at the bottom of the hierarchy, and who she associates with.
– And other.

The calf was born very recently (I guess). It is confused, it doesn’t know where it is, it feels that it is in a strange environment. It has an innate ability of spatial perception. It is fearful, it certainly doesn’t want to lose the contact with the mother, because there’s safety with its mother. It doesn’t automatically know how to feed from birth, and the mother teaches him how to do this. 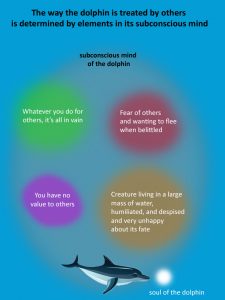