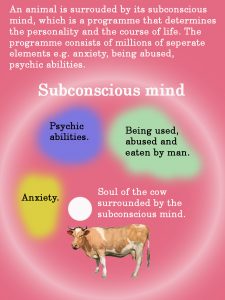 The subconscious mind is copied in a picture. This means that someone with psychic abilities can read an animal’s inner world in a picture. This means that it’s possible to know how an animal feels, thinks, and how its life is going.
By sensing the pictures, I came to know that some animals have psychic abilities and that some animals can communicate telepathically. Psychic abilities allow them to sense elements in the subconscious mind of other animals and therefore to know the intentions of other animals, and also of people. Telepathic communication, which is the result of brain function and not of psychic abilities, allows them to communicate. Animals don’t have speech organs, which makes us, humans, think that animals are inferior, but they have another means of communication, which we, humans, don’t have, and which makes them superior to humans in terms of this kind of communication.

On this site, there are pictures of animals and descriptions of what I have been able to sense about the animals.
I hope that the descriptions of these animals will contribute to a better understanding of animals in general, and that they will help people to realize that the inner world of animals differs very little from that of humans. I hope that one day humans will realize that, as the animal rights organization Peta puts it:

“Animals are not ours to eat, wear, experiment on,
use for entertainment, or abuse in any other way.”