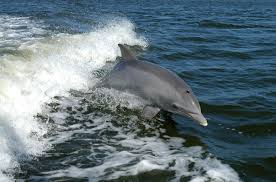 The dolphin is looking for food. He is part of a group. They swim long distances in search of food. Life is hard and difficult, it’s a struggle to find food. They sometimes have to swim for a very long time in order to find food and then there’s not always enough for everyone and then they have to fight for the fish.
There is a hierarchy in the group. The members of the group are not all equal. Some of them are stronger swimmers than others, and these are held in higher esteem than the ones who don’t swim as good. Sometimes, there are dolphins lagging behind when they are swimming long distances, and then the dolphins in the front slow down the pace of swimming a little, because no one will be left behind. He can just keep up with the group, he swims in the rear, but he doesn’t lag behind. The good swimmers also have the strength to jump high out of the water and perform all kinds of tricks. Not everyone can do that. This dolphin is average.

The dolphins that are held in higher esteem than the ones who are held in lesser regard sometimes have an aura of haughtiness emanating from them. The dolphin can sense this feeling of haughtiness in a psychic way (additional comment see *1 at the bottom of the page).
When there is not enough food, the most important dolphins get food and the others don’t. A dolphin who becomes undernourished after a long period of food shortage and is no longer able to swim, will eventually be left behind to die alone. They swim together as a group, but still, it’s every dolphin for himself. They all have to struggle to find enough food. Food is not shared, it’s every dolphin for himself. However, when a dolphin doesn’t finish a piece of fish because he’s full, and this is eaten by another dolphin, then that’s not a problem.

The dolphin knows very well what behaviour is displayed by the different dolphins in the group and he sees to it that he sticks to his position and he is careful not to offend anyone. He doesn’t want to have trouble with anyone and risk that a number of the higher ranking dolphins turn against him and try to prevent him from feeding and that he eventually has to stay behind because he is too weak. When someone of the higher ranking dolphins in the group has it in for a lower ranking dolphin, then something like this might happen.
His life is a struggle for survival, his life is a struggle to find food, there is not much joy in his life. There is not much love among the dolphins. When he has sufficient food and rest/sleep, he is satisfied.

When they have to swim too long in order to find sufficient food, they don’t always have sufficient rest/sleep. There are also periods when there’s an affluence of fish, but these are a minority. Then they are all happy and everyone is much more relaxed and there are less tensions within the group. Then the group atmosphere is entirely different, then the atmosphere is relaxed, joyful and then they play for fun. They would then chase each other, roll over one another, perform tricks (jump, turn around in the sky) for fun and not in order to determine the hierarchy, then they have swimming competitions for fun. Or they would produce new sounds for a laugh and then the other dolphins have to copy the sounds. Or they would produce complicated sounds (songs) and then the others have to try and copy them. When they play, they communicate on the basis of intuition (additional comment see *2 at the bottom of the page). They also make noises when they communicate.

The dolphin also has a whole range of sounds at his disposal (50-80 different sounds), to pass on a message.
Sounds for:
– anger
– submission, acceptance, giving in
– asserting one’s own authority
– I want to swim alone
– I will join the group again
– I will help
– I will take the lead
– I will be behind you
– I will penetrate the school of fish (swim through it)
– expressing joy
– good food in front of us
– a school of fish arrives
– hide!
– stay away from me!
– we’re going to play
– I’m going to jump
– we’re going to swim together
– we’re going to share the food (in times of scarcity)
– and other.

The dolphin is intelligent. He has a good memory. He well remembers the quarrels that have taken place between the dolphins. He well remembers the places they have swum to look for fish and he knows the places where there is fish and he knows the places where there is a lot of fish. He knows the seas very well and he knows vast areas in the sea. He has a mental view of the ocean (locally), a three-dimensional view. He has a sense of direction, left, right, above, under, behind, in front of.
The dolphins have a strategy to catch fish, they work together as a group. They communicate with sounds and with psychic perception. They perceive the psychic signals of the others, this is a feeling/a sign that emanates from a dolphin (additional comment see *3). 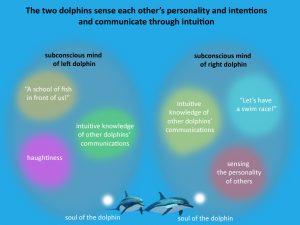