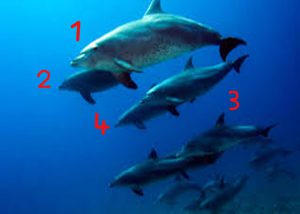 1) The largest dolphin, the dolphin at the top

The dolphin is dominant, merciless. He doesn’t care about the other members of the group, he has no mercy for others. He is a despotic leader with little regard for his subordinates. He takes charge and he pushes others away to a more subordinate position, he orders and the others listen, and he is peremptory. He commands, for example, for the formation of a group hunt and the others do as he tells them. He commands by making noises and by making use of body language. He is very egoistic. He has to be the first to feed, he has to come first in every way.
He is resentful, unforgiving. When one of his enemies dares to come near (a dolphin that he once had a dispute with, or a dolphin that didn’t obey him), then they would better take to their heels as fast as possible, because he hasn’t forgotten what happened. He still has a clear memory of the incident, as if it just happened, and he is certainly not forgiving. He will attack the other dolphins, with its snout, with its body. If you have ever tread on his toes, you are forever his enemy, he will never forgive you.

The dolphin is very intelligent. He thinks of hunting strategies. There are different hunting strategies stored in his mind and he can recall them when needed. He can make a 3D visualization of how the hunt will go about in advance. He can picture the whole hunting scenario, step by step. When he makes a 3D mental representation of something, then he sees the images he imagines outside his head, at a distance of 30 cm from his head. On the basis of these images, he can determine the best hunting strategy. He can put the images of the different steps in front of him, and he can shift them and change them, until he has found the right strategy. At the start of the hunt, he then uses this strategy in front of him in order to achieve the most success. During the hunt, he can shift and change the images, depending on the situations at hand.
He can call images to mind from all the areas of the ocean that he knows, he can make a 3D representation of all these areas. Months before, he thinks of which areas to go to and when to do so, and then he memorizes this plan. He knows very well who his enemies are.
He will never forget and forgive a negative incident that happened between him and other dolphins.

He has strong intuition (additional comment see *1 at the bottom of the page). This intuition helps him when they hunt. He gathers information from the subconscious mind of his prey or from elements in his own subconscious mind by way of his sense of intuition. That’s why he intuitively knows what actions the prey will take in order  to escape and thanks to his intuition he can anticipate to these actions. This makes him a more successful hunter.

2) Dolphin on the right side from the big dolphin

He is sociable, he likes being in the group, he feels safe in the group. He doesn’t mind that there are times with less food, unlike many other dolphins, who worry more about that. He likes playing games. He likes challenging another dolphin to a swim race. He likes playing the game of making new sounds that the other dolphins then have to imitate. He likes creating complicated sounds (songs) that the others have to try to imitate.
He gets along well with everyone, he can adapt, he isn’t annoyed by others. He can tolerate everyone and he can easily forget and forgive. He sometimes gets on the nerves of others because he can be very exuberant, thoughtless, reckless. He sometimes leaps forward without thinking and with the risk of fouling up the hunt as a result. He is too carefree, he takes life as a game, and therefore, he doesn’t realize the actual risks and difficulties of life. He is naïve, he lacks a sense of reality, he doesn’t see any danger. He sometimes also gets on the nerves of others because he wants to tease them, or because he bothers them because he wants to get attention. For example, he will brush past another dolphin in order to tease him, but the other dolphins don’t always like that.

He doesn’t have spatial perception. He can’t think up any hunting strategies, and therefore he likes to follow the lead of others. He can’t think well, he feels a little drowsy. He thinks slowly, he can’t reason, he can only perceive. He always waits for others to lead the way before doing something.
Regarding the big dolphin, he knows he is dominant, but he doesn’t care. When the big dolphin is angry with him, he doesn’t take it to heart. He gets over it easily. He is glad that he is being led, because he wouldn’t make it alone in life. He feels safe with the big dolphin.

3) The dolphin right below the big dolphin

He has very low intelligence. He almost can’t do anything by himself, he is dependent of others. He swims along with the group and he is tolerated. He can only catch a limited number of fish and sometimes he goes hungry as a result. He can only catch the easiest fish (young fish). The other members of the group throw fish at him when they have enough fish themselves. He is anxious by nature. He is afraid of the other dolphins. He prefers to swim near the big dolphin because that one leaves him in peace and he feels safe with him.

4) Second dolphin below the big dolphin

He is tired. He has an active role in the group. A lot is expected from him. He is not as intelligent as the big dolphin, but he can reason well, and he follows the lead of other dolphins well and he can follow directions well. He doesn’t have any spatial perception. He has a good character, he adapts to the group. He gets along with everyone. He can follow the direction of others, but he can also lead. He doesn’t think much about things, he just does his duty in the group. He does what has to be done and for the rest, he doesn’t question things in life.
He sees the big dolphin as the leader. He is glad that he takes the lead, because he wouldn’t be able to do it himself. The big dolphin sometimes has bouts of anger, but he doesn’t take it to heart. It always passes anyway. He simply does his duty and then the big dolphin is satisfied and then there’s no danger for him. When you submit to the big dolphin, life in the group is safe. 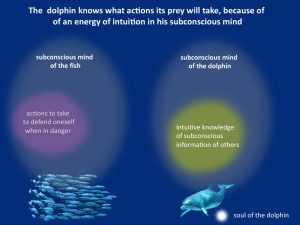 (If this link does not open properly, this is caused by a firewall or virusprotection software on your computer, if you cannot solve the problem, please send me an email and I will send you a copy of this book.)