The soul is surrounded by a programme, which is known as the subconscious mind. This programme determines personality, intelligence, health and the way life goes. The soul in humans and animals may be the same, but there are differences in the programme around the soul. The contents of the programme (the subconscious mind) is different in some respects, for example, regarding the type of body in which the soul incarnates (human or animal), the lifespan (the lifespan is also programmed in the genes), the life that goes with this type of body.

Intelligence or lack thereof don’t originate from the genes or the brain, but from the soul and the subconscious mind around the soul. However, the soul that has incarnated in a body operates through the brain. If the brain doesn’t allow a certain ability or intelligence because of its limited structure, then intelligence will be limited because of this. If the soul that has incarnated in such a body would incarnate in a different kind of body with a less limiting brain structure, then the soul in this body would manifest a higher intelligence. Some cows can communicate telepathically, something which humans can’t. When the soul that incarnates in a human would incarnate in a cow, it would have the same intelligence. But because of the limiting brain structure or the absence of speech centers, it wouldn’t be able to talk, but it would be able to communicate telepathically. Many more animals than humans have psychic abilities or have a well-developed intuition. Psychic abilities and intuition are connected to the soul, to the structure of the subconscious mind. Because animals can’t talk, they are much more dependent on their psychic abilities and intuition for communication and for knowing things, and these abilities may possibly occur much more frequently in animals as a result.
There are great differences in intelligence and ability within one species that has the same brain structure. This goes both for humans and for animals.

The programme (the subconscious mind) is mainly the same in humans and in animals, except, like I said, with regard to a few aspects (the kind of body and the kind of life). Personality, health, or whether life is easy or difficult, intelligence is the same for both. For example, a soul that has an element in its subconscious mind that makes it jealous by nature, or the opposite, a loving person, will have the same characteristics in the body of a human and in the body of an animal. So, it will be a jealous or a loving person, or a jealous or a loving cow.

A few descriptions of souls in pictures that I found on the internet.

1) A soul that incarnates in the body of an animal. 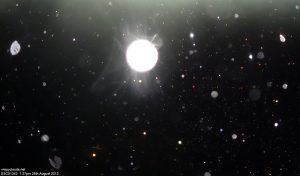 This white ball is a soul that incarnates in a cow. I can perceive images of previous lives of a grazing cow. I can also perceive elements in the subconscious mind of the soul, which surrounds her. These element dictate, among other things, that the soul will incarnate as a cow. In order to better understand this, please read my book.
The soul was released from the body a few days ago. She is confused, she doesn’t know exactly what happened, where she is. She has vague memories of having her throat slit and the blood running from her throat, but she doesn’t know how to understand this, she doesn’t realize that this actually happened. She doesn’t know where she has to go, what she has to do now, she is waiting.

In terms of personality, she is loving, she’s humble, she’s too nice, she lets herself be pushed around. In her lives as a cow, this is how she behaves. She is not very intelligent, she doesn’t understand things easily.
The haze around and above her are other, mostly traumatized souls of humans and animals that are stuck together and that are attached to her.
Her subconscious mind, which is present around her, is not visible in a picture.

The mist in the picture below is not mist, but it is traumatized souls that are stuck together. 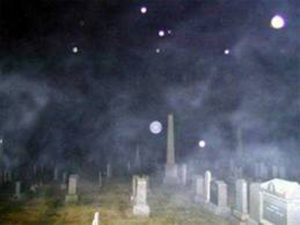 2) Souls that incarnate in humans 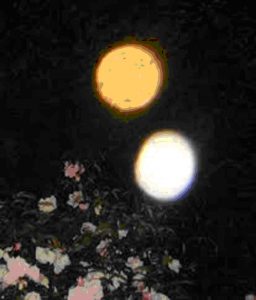 These two balls are both souls that incarnate in humans. A coloured soul, both in humans and in animals, indicates a very burdened soul.

The white soul.
It is a soul that usually incarnates as a man. I can see images of previous lives in which she is a man who studies hard an works hard, who has a technical job. I can find a few lives in which the soul is a woman. In a certain life she’s as a female slave and I can see an image of her picking up water at a well.
The soul doesn’t have an easy life, it’s a life of hard work, of a fair amount of difficulties in life, of struggling to have enough money, of saving up for a house. Relationships with other people are fairly normal, not very loving, but not traumatic either, just ordinary. Her life is a life shared by many people.
In her current condition, she is confused, she doesn’t know where she is. She is very self-absorbed, she is not aware of the world around her. It’s like she’s in a closed space (which is not visible in the picture). She doesn’t think about things, she is waiting. She’s not aware of the soul next to her in the picture. She has the feeling that she’s alone in a closed room and she is waiting. I can’t sense from the picture how long the soul has already been in this condition.

The yellow soul.
The soul is confused. She doesn’t know where she is at all. She’s very anxious. She’s very traumatized, as a result of difficulties in various lives. When she incarnates in a body, both male and female, she’s heavily abused as a child. She doesn’t get any opportunities, she doesn’t get any support, she doesn’t get any love. Her life is a struggle for survival, of living on the street, of having to eat what she can find on the street or what she can steal. A homeless person who dies at a young age.
At this moment, she has the feeling that she is in an open space, and she is vaguely aware of many other souls around her. She is self-absorbed, she is overwhelmed by the sorrow that she carries with her. She has no contact with other souls, she is shut off from contact with other souls, she is by herself. I can’t sense from the picture how long the soul has been in this condition.

According to my views, life is determined by a negative programme (the subconscious mind), which is present around the soul. Please read my book for more information on this subject. As long as the programme is not destroyed, the soul will experience roughly the same things life after life.

A second form of life force

So, there exists a life force that is a little more conscious than the life force described above. It incarnates in some plants. This type of life force of plants has some sense of being alive. In this life force, which incarnates in a plant, I have sensed the following: the life force can perceive the environment and according to what the life force perceives, there are two possible reactions: a shock reaction or a reaction that everything is all right. These reactions then induce the subsequent actions of the plant. So, I sense two possible emotional conditions in the life force: a condition of ‘happiness, everything is fine’, and a condition of ‘stress, danger’.
These emotions may possibly have an effect on the biological functioning of the plant, which can then send out signals to other plants. Science has discovered that plants communicate through biochemical and electrical signals, both above and below ground. The emotions themselves are something energetic and may possibly be perceived by the life forces in other plants and may cause a reaction in the receiving plant. 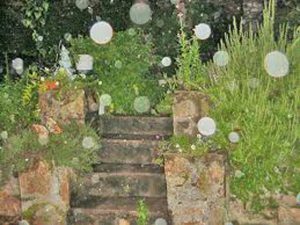